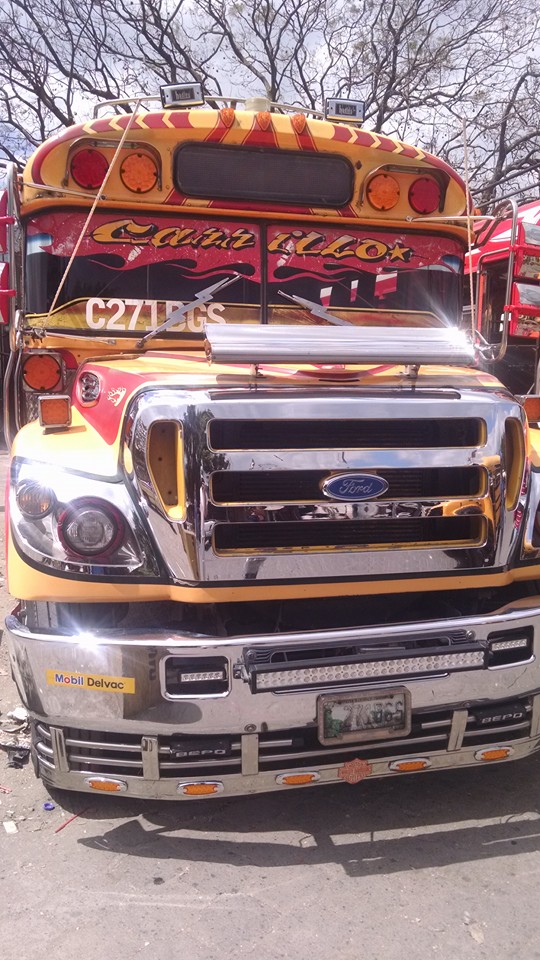 For those who are unaware, I’ve been journeying around Latin America for the past couple months as part of my trip around the world. I discovered a fascinating bit of knowledge the other day in the central market of Antigua: Guatemala is where America’s old school buses spend their golden years. Nicknamed “chicken buses,” the locals turn the boring school buses of the early 90s into some of the most pimped rides I’ve ever seen. Their creativity has lots of implications for how we treat out own personal finances and combat America’s throwaway culture.

How They Get Them

After talking with a few people familiar with the process, Guatemalan entrepreneurs and businesspeople or their representatives come to auctions in the US. When a school bus is deemed unfit for service because it’s too old, too polluting, or unsafe, a school district still wants to recoup some of their initial investment. There’s a big problem though. If that district views their old school bus as a liability, other American school systems are likely to think the same way. The lack of demand in America destroys the price of the old school bus, with few buyers that want it. This is where the Guatemalan buyers come in.

A fully functioning, comfortable US bus in new condition can cost tens of thousands or hundreds of thousands of dollars. One of these old school buses costs less than a few thousand dollars in many cases. The people in Guatemala are very poor. Most cannot afford cars, so they depend on alternative methods for transportation. Through this old school bus asset class that no one else wanted, the Guatemalans have created an entire informal transportation industry. Once they purchase the vehicles, they take advantage of the US and Mexico’s free trade agreement and literally drive the buses thousands of miles to Central America.

How They Pimp Them Out 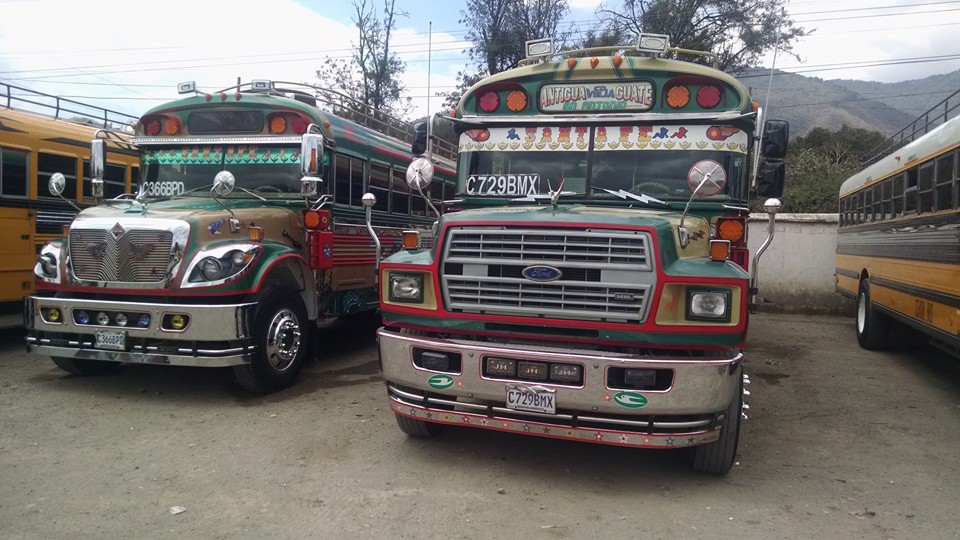 Honestly, these old school buses get turned into such amazing displays it would make MTV jealous. I came upon a parking lot for all the old school buses when they’re not on the job. The various paintings, pictures, and pinup girls reminded me of what I imagine a WW2 era fighter base looked like. True to Latin America’s penchant for brilliant colors, the buses were so beautiful I wonder if some of the drivers spent more money on the old school buses’ paint jobs than for the vehicle itself.

They all had unique ways of decking out their rides. Some guys took giant F-350 grills and put them up on the front. To that, they added rear race car spoilers or random dull plastic spikes, as if they were auditioning as extras in Mad Max Fury Road. Lots of the vehicles had scantily clad women adorning their backs and sides, so I’m assuming it’s a heavily male driven industry. Many of the old school buses had names chosen for their impressive sounding titles.

While the drivers do not make as much effort to beautify the inside of the bus, they attempt to improve what they can. Many of these old school buses receive an overhaul to their sound system. The drivers with more money like to beef up the speakers so they can blast tunes while they drive, as if to sooth the madding crowd. Another feature is their affinity for black lights. At night, it’s harder to see their beautifully decorated buses, so they’ve attached various kinds of lights you see on party buses in the US. I don’t know if they choose black lights because they think it looks cool or that they are relatively cheap, but that is their illuminator of choice. If you didn’t know where you were and saw one of these vehicles, you’d think a fraternity had gone wild and decked out the most ridiculous party-mobile you’ve ever seen.

How They Drive: Imagine Fast and the Furious Replaced With These Old School Buses 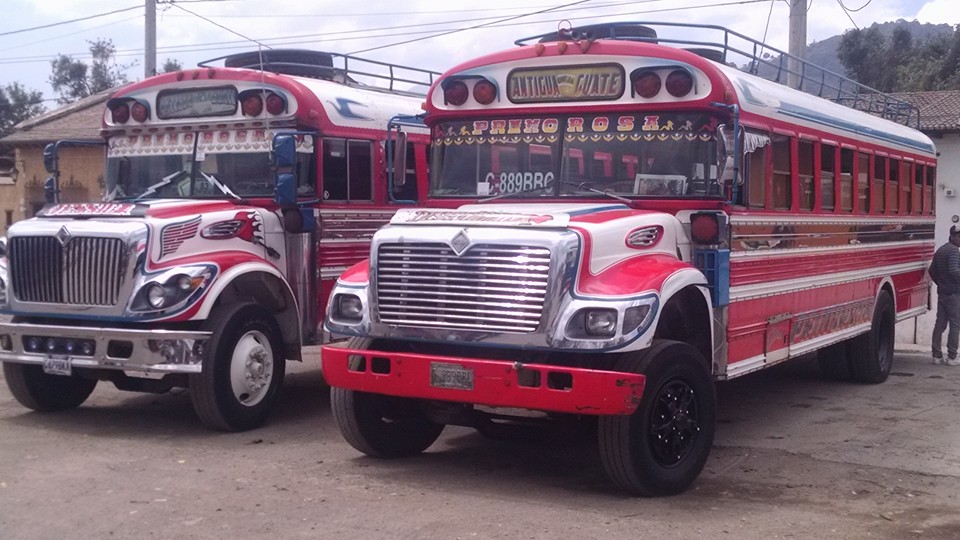 When these drivers stop, they don’t really stop. It’s more like a rolling slow motion. Perhaps they tap the brakes a few times for an elderly woman to get off with the help of the driver’s assistant. Other than that, if you are a man aged 15-60, expect to jump off the bus at a running pace. These guys love efficiency more than Toyota plant managers. The faster they do their routes the more money they make as more people rely on them and fewer competitors try to poach the route.

Their nickname “chicken bus” is derived partly by the way the drivers conduct themselves on the road. Essentially in Guatemala, there are no rules. The biggest vehicle always wins. Since that’s usually these old school buses, they pass with impunity, make turns so sharp that sometimes only two tires are on the road, and never worry about stopping for railroad tracks. Often, you’ll see the driver assistants, nicknamed “conductors,” reaching with one hand out the door to grab people onto the moving bus. 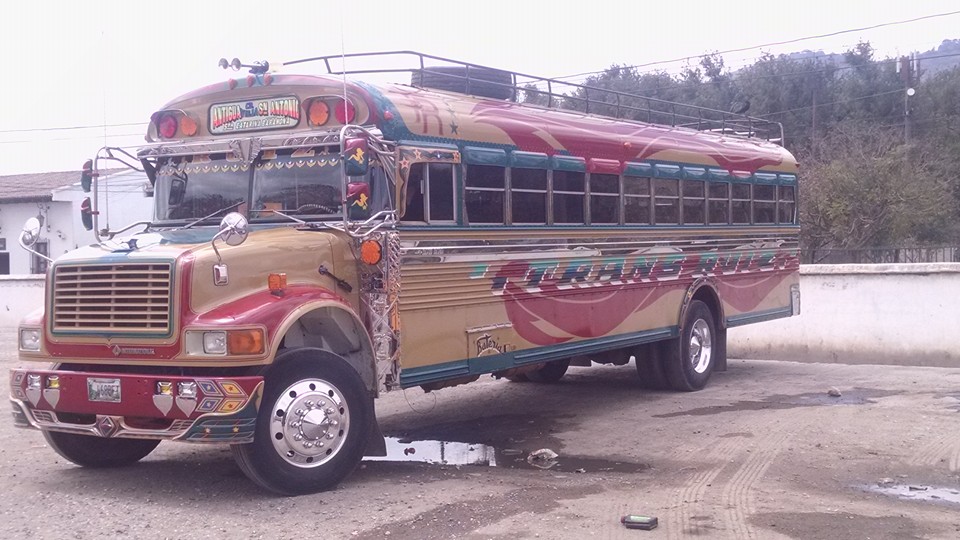 Think about if you were the mayor of a medium sized Latin American town. Your average citizen makes about $4,000 a year and cannot afford to spend more than $100-$200 a year on transportation. Clearly, owning a vehicle is out of the question. However, for a route that might draw 50,000 riders a year, so is buying a brand new low emissions bus to carry your citizens around from place to place. The average fare you might be able to charge is between 10 to 20 cents. How do you solve the problem of providing an economic incentive to get really polluting and unsafe individual vehicles off the road while also providing public transit? The solution of buying America’s old school buses seems like a genius answer to this problem.

America is a throwaway society. When we get tired of our clothes, we donate them to Goodwill or sell them to Plato’s Closet. When we get tired of our new car, we trade it in within 2 years to get another. When our income grows, we get rid of that old 3 bedroom 2 bath house for a McMansion simply because we can. When you look at the way people with fewer resources live, it reminds you that everything has a use. Sure it’s not as comfortable as your local bus system, but Guatemala’s old school buses solved a problem with capitalism that government planning might never been able to solve. The pride of the owners of these old school buses is evident everywhere, as the bright colors and Mad Max imitations show. By being frugal and thinking up a genius solution to a third world problem, Guatemala created thousands of small businesses and affordable transportation for the masses. As America’s school districts continue to replace their old school buses, Guatemala’s transportation fleet will get better and better. Rather than paying 10 times the price to get a brand new car, think about where America’s old school buses go to retire, and how awesome they look after their makeover. Guatemala has shown that frugality can be pretty sexy.