A reader pointed out a fascinating study from George Washington University and Standard and Poor’s. The researchers wanted to discover how many people around the world know what compound is. The survey targeted over 150,000 respondents in 144 countries. The study can be found from its original publisher here. In this post, I am going to focus on the policy implications from the stunning realization that 39% of Americans do not know what compound interest is.

How Did the Researchers Test the Subjects?

They used a simple test to discover basic knowledge, or lack thereof, that when you earn interest, the interest earns interest too and the sum grows at an exponential rate. Here is the survey question verbatim:

Suppose you put money in the bank for two years and the bank agrees to add 15 percent per year to your account. Will the bank add more money to your account the second year than it did the first year, or will it add the same amount of money both years? [more; the same; don’t know; refused to answer]

There were more questions than that, but the fact that so many people did not know what compound interest is blew me away. Just in case you know one of them, here is a primer.

Pretend a genie comes out of a lamp and gives you a choice between two monetary sums. The first choice he gives you sounds so strange. He will give you a penny on the first day, and double it on the second to make it two pennies. On the third day he will give you four pennies, and so on until the thirty first day of the month. Whatever the amount is on the 31st, you get to keep. So you do not get the sum of the doubling, only the final figure.

The other option he gives you is to receive $2 million upfront. He will give you 10% simple interest every day on this figure, and you get to keep the sum of the interest payments. You get 10 seconds to choose between the two figures, which one would you choose? Here are the results. 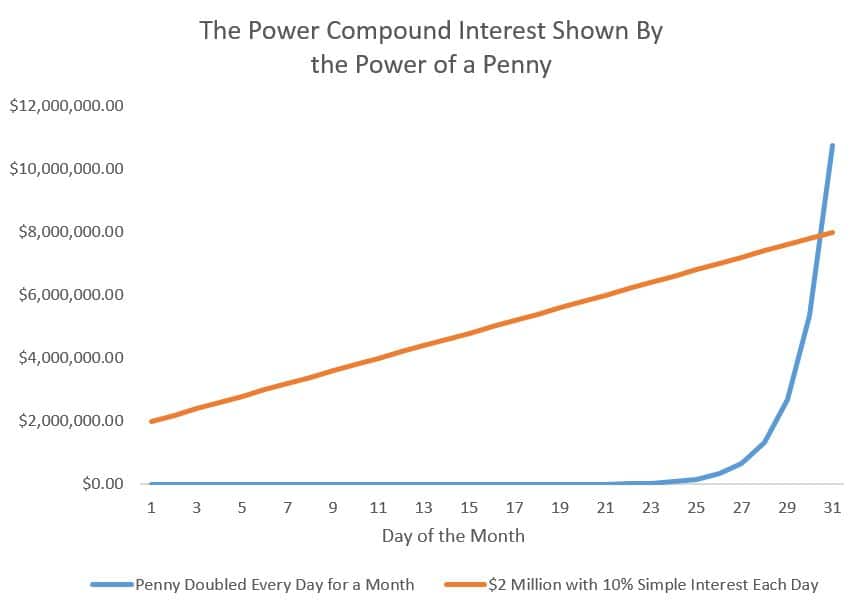 The answer is clear, you should have chosen the penny doubled every day for a month. However, how many people would have chosen that option? This is an extreme example, but it shows the misinformation present in someone’s head when they do not understand what compound interest is.

When we learn about interest in elementary school, our teachers and textbooks made it simple. Literally they made it simple interest in fact. The bank paid us 5% and we had to multiply and figure out what that is for $2,000. However, do you remember ever being asked to calculate that figure in year 2 or 3? I do not, and I feel as if I was not asked because it is more complicated than elementary schools want to make the world.

A debate surrounding how much distribution of wealth the government should do to create social programs is a legitimate debate. However, when two of every five Americans do not understand the basic concept of compound interest, how can they know the true cost of borrowing to pay for these social programs?

The national debt pays compound, not simple interest. That means it is prone to dramatic growth, and grow it has. In 1910, we owed about $2.65 billion as a country. Today, we owe over $19 trillion. Such a dramatic expansion is due in large part to our appetite for social spending that we do not actually pay for, namely Social Security, Medicare, and Medicaid. The interest costs of funding these programs is astronomical, but can only be known if you understand compound interest. Sadly, 40% of Americans are not coming to the debate with basic knowledge.

The question in the survey showed that most people think of compound interest as simple interest. In other words, they think they have $1,000 in the bank, it pays 1% in interest, so they will get $10 divided by 12 for the year regardless. After that, they get that same interest payment. This is the fundamental misunderstanding.

If you take this thought process to credit cards, the results are disastrous. We have an obscene amount of credit card debt in this country, and it makes a lot more sense why when you discover so many people do not understand the actual cost. Credit card companies do not have to send you a giant neon mailing saying “THIS IS HOW BLEEPING EXPENSIVE YOUR BILL WILL BE IF YOU DO NOT PAY THIS OFF ON TIME!” Why would they? After all, they make big bucks off ignorance so what incentive do they have to help people learn.

If you borrow $5,000 on a credit card and do not pay it off, you might think you pay 15% of $5,000 for every year you maintain a balance. If you just pay the $25 a month minimum, after ten years you would owe the card company $15,156. That figure is compared to $9,462 if you just added up all the simple interest payments. Since a lot of American households carry credit card debt for five to ten years, many folks are underestimating the cost of their debt problem to the tune of thousands of dollars.

If you do not understand the speed of debt growth with compound interest, you allow schools to mislead you about the value of their degrees. You buy a car with a low credit score and then pay for two cars after the car loan is paid off. You go to a pawn shop and borrow against the value of your engagement ring. In other words, you stay poor.

What Other Consequences Might There Be From Compound Interest Being Such an Unknown Concept?

I love to hear thoughts from readers, so if you can think of other real world or political implications from the extreme lack of understanding around compound interest, comment below about it. We need to start a conversation in this country of how to expand financial literacy, especially for the poor. We are addicted to debt and the problem is only getting worse. We can at least educate people as to the cost of this debt if they learn what compound interest is. Help a neighbor out and help them understand. Einstein said:

Compound interest is the eighth wonder of the world. He who understands it, earns it … he who doesn’t … pays it.

It’s too bad two out of five people have never seen this wonder.
13
SHARES
ShareTweet

4 thoughts on “How Many Americans Know What Compound Interest Is?”