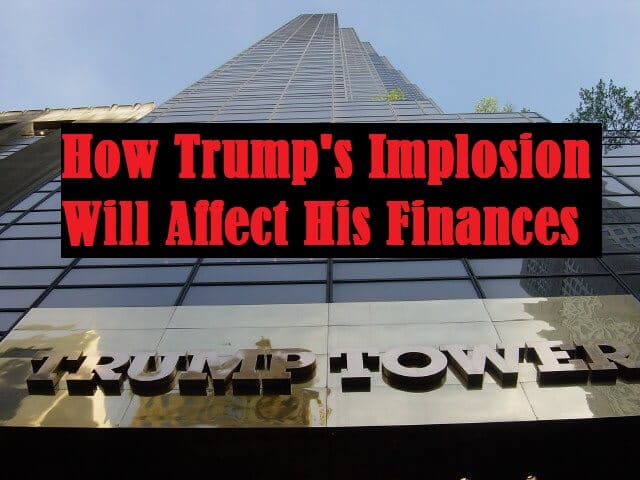 Donald Trump is not even close to being worth “10 BILLION DOLLARS.” In fact, I’ve long held the position that he is running for President to personally enrich himself and to intentionally lose. The key to his strategy is increasing the value of the Trump brand. Unfortunately for him, this strategy took on water after the release of a tape with him making vulgar comments about women. Trump’s implosion will affect his finances, just not completely in the way you might think.

Until recently, Chick-Fil-A’s approach to fast food was to essentially corner the market on evangelical Christians. They did this by closing their stores on Sundays and supporting conservative organizations. When the founder made comments opposing gay marriage, thousands of people showed up at Chick-Fil-A restaurants all across the country in support.

Trump decided to employ this approach to business ever since he began questioning the President’s birthplace. If you’re a politician, you need to impress the majority of the population with your positions. If you’re in business, you only need 20% of a market to become extremely rich.

How do I know that stratifying and cornering a market was Trump’s strategy? In his financial disclosures, he lists the value of his brand at over $3 billion.  He also lists the royalties and fees from his licensing deals at $32 million to $55 million. That means his brand could be worth anywhere from $32 million to $200 million depending on the multiple of Price to Sales that you used. He currently estimates his brand’s value at a multiple of any brand in the entire S&P 500.

Certain working class white folks with particular stereotypes did not have a champion prior to Trump. He saw this opening to become a populist, nativist loudmouth and figured he could transform this fame into further brand value. After all, that’s why hotel owners pay him currently to put his name on buildings Trump doesn’t even own. It’s because of his fame and notoriety.

How “The Tape” Affects this Brand Value

Last night in the second presidential debate, I predicted that Trump would go into full blown brand damage control mode. He turned in a solid performance, not to win the election, but to save the value of his brand. He was trying to reach his core of loyal supporters to get them back on his side. After all, he’ll need them after this election to keep him relevant.

The Trump brand undoubtedly takes a hit from “the Tape” fiasco. Women will not want to be associated with anything he does. Any cache associated with living in a Trump property is also gone. To be wealthy and associated with Trump is like carrying around arsenic in your pocket right now.

He will still be able to sell to his core loyal supporters after last night. He took on Hillary Clinton, successfully tabled his jokes of sexual assault, and painted Bill and Hillary as bought by special interests from the millions of dollars they’ve made since they left the White House. Independents, Democrats, and many Republicans will find this repugnant. However, his loyal core will love that he came into the debate in a precarious position and looked solid for a large chunk of it.

I’d expect some of the hotels he is associated with to seek to break their contracts with him over time. I also expect that Trump will be able to pick up new marketing deals that will offset some of this loss in revenue.

We still have yet to see what will happen when some of the huge leasing contracts come up for renewal at his premier properties in NYC. I would expect that the going rate for staying in a Trump property has declined “TREMENDOUSLY” in the past couple days.

A big part of the value of real estate is the income you can derive from it. There will always be a floor on what a real estate company can charge for rent on a top location like 40 Wall Street. I also expect that Trump’s tenants will approach this floor in what they’re wanting to pay. After all, if you were trying to woo employees to work for you, especially female professionals, how would they feel about working in a Trump building? Since leasing contracts are typically long term in nature, we have yet to see the impact from this.

The point I’ve wanted to bring up this whole article is what happened with Clippers owner Donald Sterling. Remember when he said racist comments that “he didn’t want black people at his games?” The NBA went into a massive uproar and players rejected the idea of playing for his team. Lebron demanded that he be removed from the NBA, and other players like Steve Nash supported his ouster.

Essentially, the whole basketball world was against Sterling after he made these comments. You would think that the value of his franchise would be affected. After all, no one wanted to play for him and his brand became associated with racism, one of the worst possible feelings to have attached to a business.

Not only did Sterling make out ok, he got a record price of $2 billion for his sale of the Clippers to former Microsoft CEO Steve Ballmer. The media forgot to mention that even though the owner of the Clippers was a racist bigot, he still owned one of the few professional sports franchises in Los Angeles. In other words, the fact that the Clippers are a blue chip property dominate Sterling’s racism.

Trump’s Implosion Will Affect His Finances, Just Not as Much as You Would Think

The same is true for Donald Trump. He became wealthy from his father’s inheritance, his management of Trump Enterprises, and because he happened to own mostly NYC real estate in the best period to own NYC real estate in history. In other words, Trump is extremely lucky because he has blue chip properties, many with minimal debt.

Even though I view outrageous real estate prices in NYC and San Francisco as an egregious bubble ready to pop, there’s still “TREMENDOUS” value in the properties Trump owns. Trump Tower is right across from Central Park and has some of the best views in NYC. 40 Wall Street is an iconic location. 725 Fifth Ave will always be a wonderful location for retail.

If Trump actually did some of the things he bragged about in that tape and went to jail, the value of his properties would take a bit of a hit because of leasing difficulties, but he could still sell them for an enormous sum. Blue chip holdings are blue chip even in the hands of a bigot. That’s what we learned from the Donald Sterling scandal.

One Thing’s For Sure, Trump’s Net Worth is Declining

In the latest Forbes ranking, Trump’s net worth fell by $800 million to $3.7 billion. Bloomberg places his net worth even lower at $2.9 billion. It all depends on how you value his real estate and brand. Apparently, Manhattan retail and office space value dropped, which drove the recent dive in his worth. His fortunate is inseparably connected to the value of NY real estate. If it rises, he will do well. If it falls, he will be crushed.

Trump haters should be comforted that he is neither the richest nor most important NYC developer. However, he is the loudest. This irreverence has given him fame, marketing deals, and brand value to place on his hotels. He mentioned in the debate last night that he would invest $100 million of his own money before the end of the campaign, which is false. He is charging the Secret Service for use of his plane after all.

The only reason he wouldn’t spend more money to be elected is if he just didn’t care about the Presidency. He offered John Kasich the opportunity to essentially run the White House as long as he got to be the figurehead. He’s never been interested in policy, which is why he’ll ramble about state lines and eliminating them as his grand health care vision.

In summary, Trump’s brand value will suffer from professionals with a college education. Some working class white men will still support him, and he might try and convert them to customers as some point after he loses the election. Finally, he could be pushed to sell his NYC properties depending on how the dust settles. If he does, he’ll get a premium price for them. At least we know he won’t get the free spotlight he craves for much longer. Trump’s implosion will affect his finances, just not as much as you might hope.

One thought on “How Trump’s Implosion Will Affect His Finances”