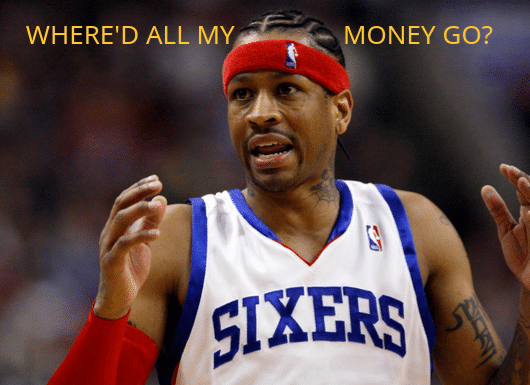 For those of you who don’t know Allen Iverson, he was one of the greatest guards in the history of the NBA, but unfortunately his play on the court didn’t translate to financial skill. There was a pretty funny story the other day on Bleacher Report about Allen Iverson at a strip club spending so much money that it drove him to the verge of bankruptcy.  He would go out with Matt Barnes (currently on the Clippers) and literally throw $40,000 (!!!!!!!!!!!) in the air. Most of us look at that habit and think, cheez what an idiot, of course he went broke what fool would spend 40 g’s in a night I would never do that. But do you?

In the course of his NBA career, it’s a conservative estimate to assume that Iverson made $200 million from salary and endorsements. That’s a ton of money. The average person with a bachelor’s degree over the course of their life makes about $2 million. Woa! That means that the strip club equivalent spending as a % of lifetime income for the average college grad is about $400.

There are plenty of ways to spend that much if you aren’t careful. The first way that’s obvious is the same kind of establishment that got Iverson into so much trouble. Consider some more socially acceptable places that you can spend that much in a short period of time: nice restaurants with fine wine, night clubs, bar hopping, music festival weekends, race tracks, EDM concerts (they were selling Miller Lite for $17!) , nights at the opera, floor seats at pro sports events, and Apple stores (like really, $29 for earbuds?) I’ve been guilty of overspending. One time we went to a prix fixe (that translates to expensive as sh#t in French) spot in Miami that was around $140 after food and drinks. When this story about Iverson’s strip club spending came out, my first thought was one of judgment. Then I realized the plank in my own eye, and I realized that I had better judge not lest I be judged.

So if the equivalent of spending like Allen Iverson in a night for most readers of this blog is $400 and that resulted in bankruptcy, spending $200 routinely in a night is probably a recipe for not being able to retire in a very, very long time. Have you ever dropped $200 or more in a night? Where was it and was it worth it? Leave your responses in the comments below.

And remember whenever you get tempted to spend hundreds in a night, try to live vicariously through these guys, or you’ll be singing Throw Money in the Air Like I Don’t Really Care (About My Retirement).

2 thoughts on “Do You Spend Like Allen Iverson At A Strip Club?”