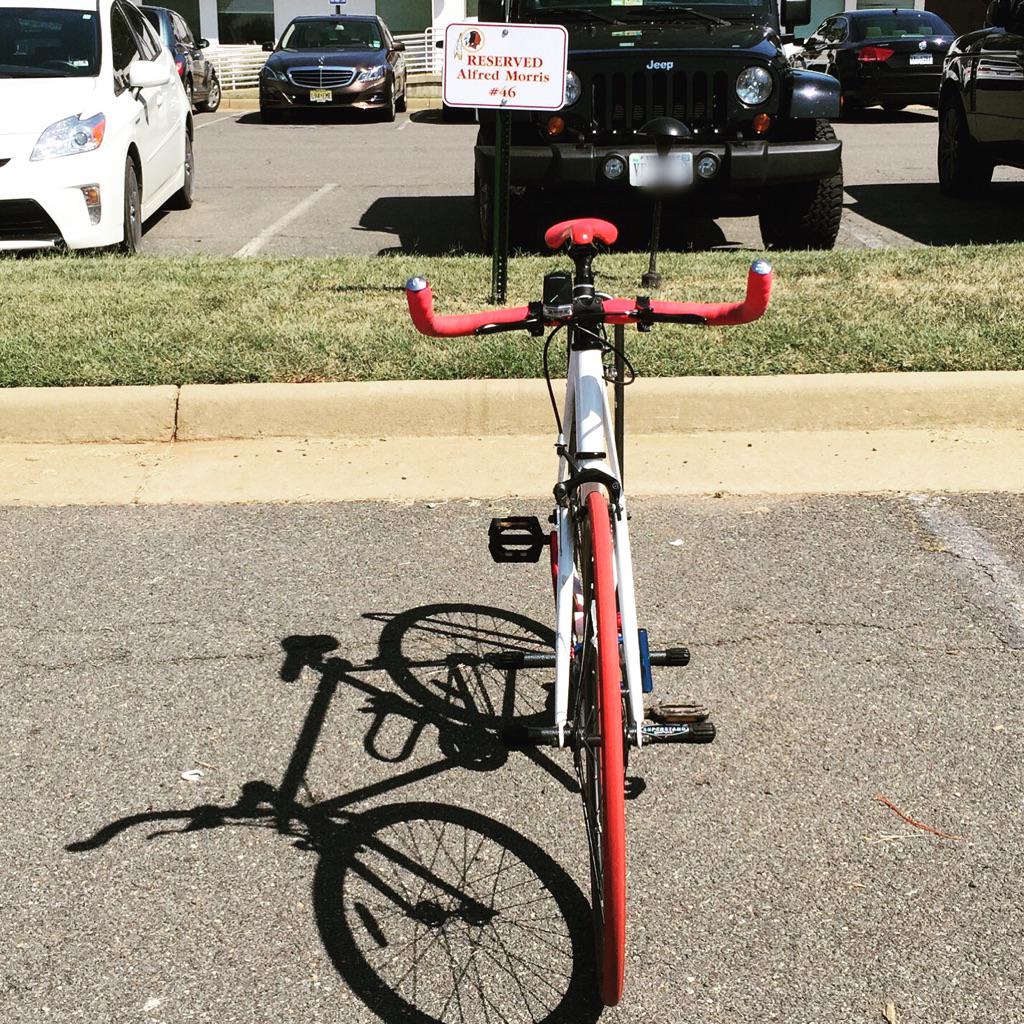 Alfred Morris, the starting Running Back for the Washington Redskins, got a ton of attention recently in the sports and business press for the shocking revelation that he rides his bike to work. Check out that photo on the left. Even though the bike doesn’t look too shabby, consider the parking lot competition he is tempted to compete with. Almost every vehicle is a luxury car. Professional athletes are notorious in the media for driving hot vehicles and spending money like there’s no tomorrow. However, when I got to looking at Morris’s situation more closely, I realized that Alfred Morris has the smartest financial mind in football, perhaps rivaled only by Ryan Broyles, who lives off a $60,000 a year budget with his wife.

How Much Money Does Morris Save Relative to His Peers?

The write-ups by reporters suggested Bentleys are a common sight in NFL parking spaces. So I decided to see how much one would cost.

I checked out prices for the new Bentley Continental GT with a V8 engine, because you know why would you get a Bentley and not get the awesome engine. The MSRP was around $215,000, and that’s before dealer fees and taxes. Let’s assume he pays 8% in taxes and fees to buy the car, so there’s an additional $17,000 you can add on to the vehicle price. That’s a total of $232,000 just to buy it. I also checked out the total cost of ownership because that should be included on top of the purchase price. The estimated cost of maintenance was around $3000 a year and the estimated insurance premium was about $3500 a year, which feels absurdly low. I think given you have a young pro athlete behind the wheel, the insurance premium would more, and also you have to throw in liability coverage too.  So I’m going to take a higher number of double the cost listed on the site because I looked up the average for all drivers and most drivers of luxury cars are older. So the all-in cost of the the car in the first year would be around $242,000, and that’s if he bought it in cash.

It’s far more likely that a pro athlete with a nice income like Morris would finance the vehicle so that he had access to more purchasing power. Guys will often buy houses, maybe a car for their family, nice suits, jewelry, and other expensive services like bottles at night clubs. A typical player getting a $1 million salary could qualify for a $3 million home which will take up about 35 to 40% of his paycheck in mortgage and maintenance costs (big homes are more expensive). Looking at transportation, a Bentley would represent about 40-45% of the after tax earnings of this typical player if he bought it outright. It probably costs more like 10% of after tax earnings if financed. So it’s easy to see how most players will blow more than half their income before they even get to funding an entourage, helping out friends and family, and buying other luxury goods. This is in a league where the average career is less than three years and many players don’t have good economic prospects outside of football, thanks to degree programs that facilitate sports production for University Athletic Dept, Inc. over post sports success.

Alfred Morris is actually the quintessential Average Joe of the NFL with his contract. The average NFL player at best makes around $2 million a year, and that’s taking into account monster contracts, so the middle 50 percent is probably barely cracking $1 million. His pay jumped dramatically in 2015 after only making about $400-$500k the previous few seasons. His total for this year is supposed to be about $1.57 million. He works in DC which has a 9% top income tax bracket and he is paying the top rate for federal as well at 40%. Since most of his income is in this bracket his effective rate is probably something like 45%. So if that’s the case even though he’s making a lot more money this year he’s only going to take home about $860,000. When I look at the cost of a Bentley that would represent almost 30% of his after tax earnings. While he could and should get a big contract that recognizes him as one of the top 10-15 backs in the NFL, because of the nature of the sport, that’s never guaranteed. We were reminded of this by Terrell Suggs’s ACL injury this weekend.

So he could have just drove his cheap car to work, but instead he rides his bicycle. He has mentioned owning a Mazda before so some of these costs are fixed, but he exercises and pollutes the air less all while saving money on gas. He probably gets food provided to him for the most part so that’s a free input into the energy he needs to pump pedals. Furthermore, a good street bike isn’t going to cost more than a few thousand bucks.

So Morris dodged a big pitfall a lot of players fall for when they get their first big pay increase. He could’ve spent 30% of his take home pay on 1 car, but instead that money is getting socked away for a rainy day. While I haven’t seen any information about his housing, I would imagine the same sort of practicality and intelligence is carried over to his living space as well.

How I Discovered that Alfred is the Real Deal

I checked out an earlier story about Morris that came out after his breakout rookie season that highlighted his ownership of a 1991 Mazda 626. He owned a 22 year old car after consecutive 1000+ yd seasons as a starting NFL running back. He even has a nickname for the car, calling it “Bentley.” Wikipedia talks about how his brother played football as well and majored in Math. Clearly, that savvy for numbers runs in the family.

I used to feel good about owning a used SUV that was close to 10 years old, but compared to Alfred Morris I’m a fraud and an exorbitant spender. He makes about 20 times what I did in my highest earning year, but he spent even less than I did on the key personal finance category of transportation after having one of the most unexpected breakout rookie seasons in recent NFL history.

He drove this old car from South Florida all the way to DC, and after that news went viral Mazda tried to get some free publicity by offering to fix it up for free. Alfred obliged and instead of asking for a pimped out ride, he got them to install a CD player and tune up the engine to make sure it would run well “for the next 20 years.” That’s right, he doesn’t plan on upgrading to a big time car when he gets his monster contract that will come. He says he keeps his “Bentley” because it helps him stay grounded and reminds him where he came from. In case you were wondering, the blue book value for a 1991 Mazda 626 is basically impossible to find, you have to look at the 1992 model in perfect condition that’s listed at $1100. That’s one affordable ride.

Alfred Morris Has the Smartest Financial Mind in Football, And We Should Learn From Him

He is a model citizen for what it means to avoid to the “rush to upgrade.” You will find temptation in your entire life when you do well or get a big raise at work to take that money and use it to increase your standard of living. While this can be ok if you do it in moderation, making “more, more, more” become a habit will leave you less financially secure and less fulfilled in life. Alfred is basically saying, ok I have this ceiling for my lifestyle expenses and if I’m a starting NFL running back or a just another guy I’m going to not let all this success to my head. Instead of upgrading your life, you can take that extra money you get from a windfall, raise, new job, or other financial blessing and use it to either make your family more financially secure or give to charity to the many needy people out there.

An excerpt from Matthew 6: 19-21 that I think sums this up how Morris is living quite nicely. “Do not store up for yourselves treasures on earth, where moths and vermin destroy, and where thieves break in and steal. But store up for yourselves treasures in heaven, where moths and vermin do not destroy, and where thieves do not break in and steal.  For where your treasure is, there your heart will be also.” Here’s to professional athletes like Morris that are showing us how to live more meaningful, more financially responsible lives. Go #46!!!

*Full Disclosure: I’m from the same hometown as Alfred, a little town in the Florida Panhandle called Pensacola, FL. Hence, I might have been a little pre-disposed to liking him even before finding out about his frugality. So following his story has been all the more rewarding and seeing our small town values lived out throughout his unexpected NFL success has been loads of fun.

Stay classy and good luck finding a 20 year old “Bentley” of your own!