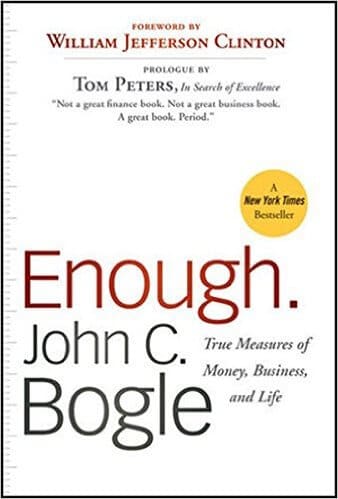 John Bogle, the founder of Vanguard, wrote an interesting book a few years back called Enough: True Measures of Money, Business, and Life.

In it, he talks about how he accidentally returned about $50 billion back to Vanguard shareholders by making the company a mutually owned business rather than a privately held business like Fidelity. Instead of $50 billion, he’s only worth about $50 million. That’s the first time I was confronted with the thought of how much is enough to walk away.

How Much Was Enough for Me?

If I had stayed on as a bond trader, my net worth today would probably be around $300,000 to $400,000. It is a little less than that, but I’m cool with that. I felt underappreciated at work. I didn’t like the idea of sacrificing 50 hours a week of intense effort for something that didn’t fulfill me.

If I’d gone to Wall Street for a trading job, I probably would have started at around $200,000. That total compensation might have grown to as much as $500,000 over a five year period if I proved myself there as a trader on the Street. Even so, I doubt I would’ve been happy. If my family needed me to work in a traditional job such as this, I would. If I needed to clog this blog with click bait ads and lousy credit cards, I’d at least be tempted.

However, my “early retirement” or whatever you want to call it is only possible because I decided that my savings was enough to walk away from corporate America. I could be more secure, in fact it would have been very wise to work for a few more years. Blogging certainly doesn’t make very much money. I’ll be shocked if someone refinances their 6% student loans to 2% to 3% with Sofi along with a $100 reader bonus, but it’d probably be great for them and I’d make money too. I’ll be equally shocked if someone signs up with Wealthfront and gets sophisticated investment management for 1/10th the cost of expensive wealth managers like Wells Fargo and Merrill Lynch. If someone did though, I’d make a few bucks and they’d probably be way better off.

Even if I had plenty of money, I’d probably refer people to products and services I think add value to your life at a good price. I gain happiness by helping people find value. The part of my bond trader job that I loved was coming up with ideas to buy undervalued assets. I love fantasy football because I can find underdrafted free agents that perform like elite players. My “work” of blogging and doing $100 student loan consultations that can save people thousands of dollars is now fun, so it’s not about walking away for me as I have nothing detestable to walk away from.

Would Your Job Pass the Lottery Test?

What I mean is, if you won $10 million tomorrow in the lottery, would you keep doing what you’re doing now at work? Would you quit, take more time off, or tell off your boss if you became wealthy enough to do anything you want? For most people, the answer is yes.

If that’s the case, the only thing stopping you is figuring out what your “enough” figure is. Like I said, for me it was very low. I’m not financially independent, but I can pay rent and living expenses out of my savings for about 20 years or perhaps 7 to 10 years if I started a family.

The problem when you ask people what “enough” is, it’s always more.  Esquire magazine recently profiled four men at different income levels to ask them about money. The common thread? They all said they’d need about three to four times their current wealth level to leave their jobs.

I have words for them. EVENTUALLY BOTH YOU AND I WILL BE DEAD. For me, that means I want to attempt to find worth in glorifying God and following the example of Christ. As long as I live, I want to help people as much as I can. I believe that my gifts are in teaching others about personal finance. If I can help them take financial control over their own lives, I have a purpose. When I traded bonds, I tried to impact people positively by not using as many swear words, treating people with respect even when they did not respect me, and doing the best job I could.

Eventually though, I realized that every year I’d be trading it would be for the money. I decided to cut my expenses drastically and now I’m free to do most anything. If I make some money doing it, like suggesting you sign up with Republic Wireless to get 2GB of LTE data and unlimited talk and text on a brand new phone for $30 a month, then great.

16 thoughts on “How Much Money Is Enough to Walk Away?”